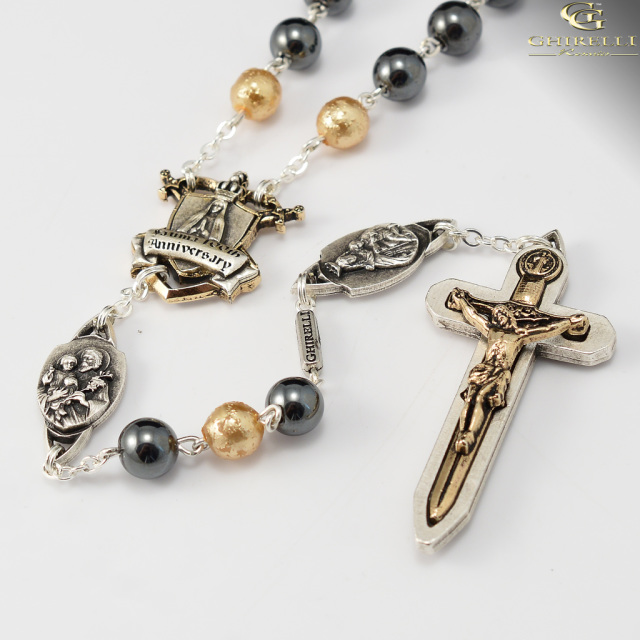 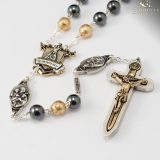 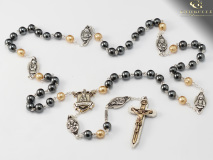 Hematite is one of the most abundant minerals on Earth's surface in the shallow crust. It is a common rock-forming mineral found in sedimentary, metamorphic, and igneous rocks at locations throughout the world. Hematite is the most important ore of iron.

The medals feature Our Lady of Fatima, the Angel of Peace, the three Visionaries, Lucia Santos, Francisco and Jacinta Marto, and the final apparitions, Our Lady of Mt. Carmel and St. Joseph holding the child Jesus blessing the world.

As the 100th Anniversary of the apparitions of Our Lady of Fatima approaches, Called to Knighthood is proud to release the commemorative Fatima 100th Anniversary Warrior's Rosary™.
Sold out
Add to Cart
​Designed by the author of the book, "Called to Knighthood", Thomas K Sullivan, and manufactured by the Premier Italian rosary makers in Italy, Ghirelli, this rosary is the only one-of-its-kind design.

The front of the centerpiece features Our Lady of Fatima placed over the shield and crossed swords with the banner reading "Fatima 100th Anniversary". The back of the centerpiece features a beautiful image of Our Lady of Mt. Carmel holding the child Jesus raining down rays of grace upon a woman Knighting a Knight on his knees, representing Holy Mother Church administering the Sacraments of Baptism (Enlistment into the service of the King) and Confirmation (Strengthening for Spiritual battle).

The Our Father Medals are also constructed from Zamak alloy in a silver antique finishing. No Knight, Warrior or Soldier goes into battle alone. The Catechism of the Catholic Church makes it clear that prayer is “a battle”. Therefore, this Fatima 100th Anniversary Warrior’s Rosary™ features, Our Lady of Fatima, the Angel of peace, St. Joseph and the child Jesus, and the three visionaries on each of its medals which forms an elite spiritual “Special Forces Team” that goes into battle with you every time you pray the rosary.

The first Our Father medal features an image of St. Joseph holding the child Jesus blessing the world during the final apparition at Fatima.

The second Our Father medal features an image of the Angel of Peace who appeared 3 times to the Fatima children in 1916.

The third Our Father Medal features an image of Lucia Santos, the eldest of the three child visionaries.

The fourth Our Father Medal features an image of Francisco Marto, the cousin of Lucia and brother of Jacinta.

The fifth Our Father Medal features an image of Jacinta Marto, the youngest of the three child visionaries and the cousin of Lucia Santos and younger sister of Francisco Marto..

The sixth Our Father Medal features an image of Our Lady of Mt. Carmel holding the child Jesus. This appearance of Our Lady was also part of the final apparition at Fatima.

The Chain is hand made in Italy using brass wire & strong linking chain in a silver finish.

This quintessential rosary belongs in the hand of every man, woman and child - all of whom are called to be warriors in the Kingdom of God, a call that is rooted in the two great Sacraments of Baptism and Confirmation.

The Christian life is a warfare.  We are taught that “the whole of man’s history has been the story of dour combat with the powers of evil, stretching, so our Lord tells us, from the very dawn of history until the last day. Finding himself in the midst of the battlefield man has to struggle to do what is right, and it is at great cost to himself, and aided by God’s grace, that he succeeds in achieving his own inner integrity.”(CCC 409)

This is a battle that is fought with the Sacraments and with prayer. This is our arsenal, given to us by Christ our King!
And what more powerful prayer is there than the Rosary?

“Give me an army saying the Rosary and I will conquer the world,” said Pope Blessed Pius IX.

“The Rosary is ‘THE’ weapon,” said Saint Pio of Pietrelcina (Padre Pio).

The power of prayer, especially praying the rosary cannot be overstated.

As St. Dominic told us hundreds of years ago, “One day, through the Rosary and the Scapular, Our Lady will save the world.”

The rosary being such a powerful weapon of prayer, demanded the creation of THIS Warrior’s Rosary.

This Warrior’s Rosary brings together the elements of “Military Combat” and “Spiritual Warfare” and places one of the most powerful weapons of spiritual warfare into your hands.

Each piece is custom designed to embody the reality of a Spiritual Warrior in the Kingdom of God that every baptized Christian is called to be.

Once we are enlisted into the Kingdom and strengthened for battle, we have at our disposal the weapon of Prayer: “Just as Jesus prays to the Father and gives thanks before receiving his gifts, so he teaches us filial boldness: ‘Whatever you ask in prayer, believe that you receive it, and you will.’” (CCC 2610)

Let us ask, in faith, for the strength, the grace, the wisdom to engage in this warfare with the rosary - heaven’s “weapon of choice”!